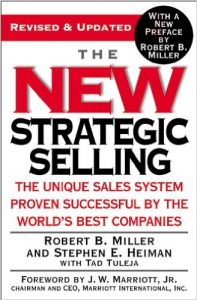 What is a strategy? The Oxford English Dictionary defines it as, “A plan of action designed to achieve a long-term or overall aim“. For example, an “economic strategy” is when a government implements measures to increase demand or production in a country. The word “strategy” also has a strong association with the military world, where decisions to mobilise forces on a particular front, the type of troops to deploy and the way in which battle is to be waged determine the outcome of a battle. But is it meaningful to talk of a sales strategy? According to Robert Miller and Stephen Heiman, the authors of the 1985 book the Strategic Selling, the matter is clear cut. Let’s get straight down to how you, as a B2B salesperson, can co-ordinate actions and carry out manoeuvres to achieve your goal… which is to sell a solution.

N.B.: this article is based on the revised version of this method (2005)

Strategic selling: you may have won the battle, but you haven’t won the war

Strategic Selling is based on an observation similar to the one behind Neil Rackham’s SPIN Selling (see our article on this subject here): salespeople use methods which may well be tried and tested when it comes to selling, but weren’t designed with a win-win philosophy in mind. If you win a major battle but sustain losses in the process (the customer is left feeling used, bad reputation, etc.), you’re in danger of losing the war. Stephen Heiman believes that a salesperson’s success relies on an approach in which there is no room for manipulation, lies, selective information, etc. Instead, a trust-based relationship with the customer generates a sustainable link, repeat business and recommendations from the customer to prospects. Simply put, the goal of the strategy is not the sale itself, but a relationship which will bear fruit in the long term. 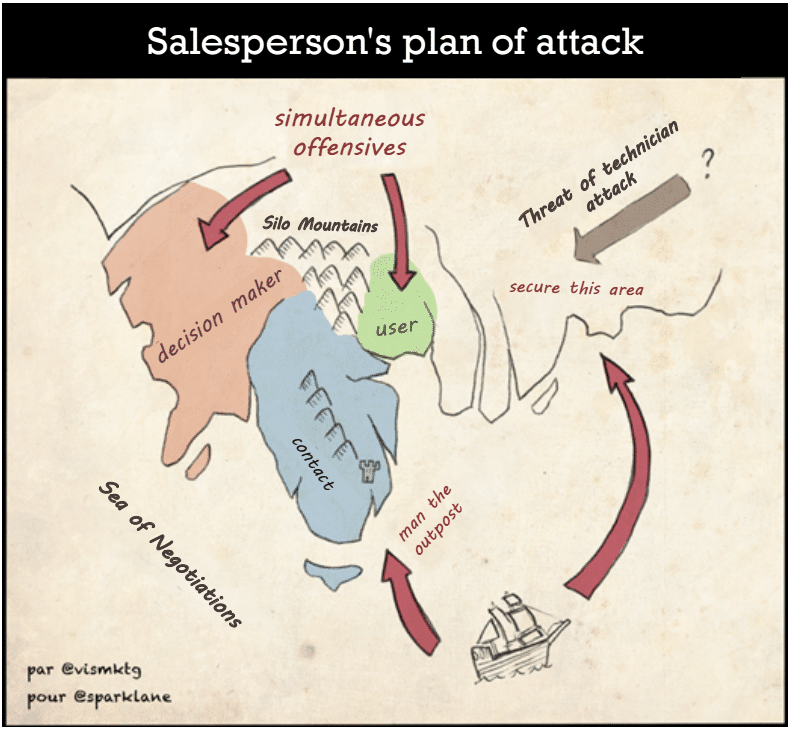 In many respects, the sales representative’s strategy is similar to a military attack strategy: territory captured, ground lost, battles to be won, plans to be rethought, ultimate victory or defeat, etc.

In this article, we’ll focus on 4 key elements of Strategic Selling: territory, time, competition, and creating an action plan.

Analyse the territory and identify opportunities

Sun Tzu said: “The entire success of an operation lies in its preparation. “

Just as a strategist prepares for a battle by analysing the terrain to mark out obstacles, heights and open plains, a good seller must prepare for a sale by analysing his own terrain; in other words, the customer. At this stage, data is your best friend: with its ability to collect a large volume of data, cross-reference and contextualise it, Sales Intelligence offers the salesperson the key information he needs. Heiman separates this information into two categories:

1- Demographic data: data relating to the objective, quantifiable characteristics of a particular group. How many prospects are there in my target group? Are my products compatible with their infrastructure? What’s the average budget spend on solutions like mine?+

2- Psychographic data: this subjective data measures the attitudes of a particular group. Are these prospects open to innovation? What’s their attitude towards suppliers, customers and shareholders? Are they more interested in quality or quantity?

Back in 1985, psychographic information was hard to come by. Now, with the abundance of available data, that problem no longer exists. And knowledge of the terrain which combines demographic and psychographic data provides the salesperson with a solid footing from which to launch the attack.

Buyers don’t just buy a product because it fulfils a rational need, they also buy to satisfy a desire: so knowing customers’ desires and understanding how to satisfy them using psychographic data gives the salesperson an obvious advantage.

Master your most precious resource: time

Sun Tzu said: “War is like fire; when it is prolonged, it endangers the one who started it. “

As Heiman explains in Strategic Selling, the salesperson’s most precious resource is time. And wasting such a resource can compromise his goals. After all, the time actually devoted to the sale represents a minuscule proportion of the total time. Most of a sales rep’s daily tasks are not related to the sale itself. So much so, in fact, that most salespeople wish they had an extra 24 hours a day to tackle the associated tasks on their plate. Heiman lists some of these time-consuming tasks as:

For the salesperson, important (and sadly necessary) though these tasks may be, they represent time away from the customer. Heiman estimates that they account for at least 75% of the salesperson’s time, and this figure can easily rise to 90%.
So how do you make the best use of a salesperson’s time? Heiman proposes a sales funnel which shows the salesperson exactly which steps to follow to avoid wasting the B2B vendor’s most precious resource:

3-Set up tracking for each prospect according to their progression through the sales funnel, for each stage from “first contact” through to “contract signed”. Note that there are a multitude of software solutions which can help the salesperson with this task;

4-  Establish priorities in each part of the sales funnel based on goals, and ensure no task is overlooked;

5-Assign time to each level in the sales funnel, letting you sharpen your skills in each stage of the sale (prospecting, negotiation, closing, etc.)

6- Plan sales based on the speed at which leads move through the sales funnel. 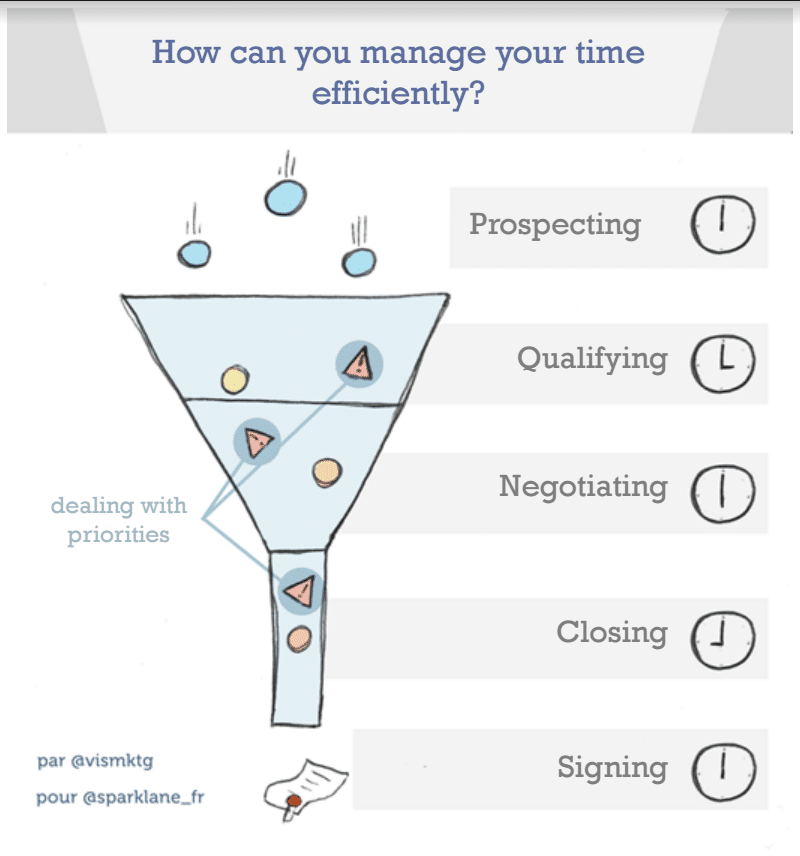 As Heiman says, “If you follow these rules, not only will you make the most efficient use of the limited time you have, but you’ll also increase your chances of success in the sale.”

Competition: should you go into combat?

Sun Tzu said: “The supreme art of war is to subdue the enemy without fighting. “

How do you beat the competition? That’s the question every salesperson asks. But is it really the right question? Well, it depends on your definition of “competition”. Heiman believes that if the definition is expanded to cover “any solution other than your own”, there are 4 types of competition. These are: 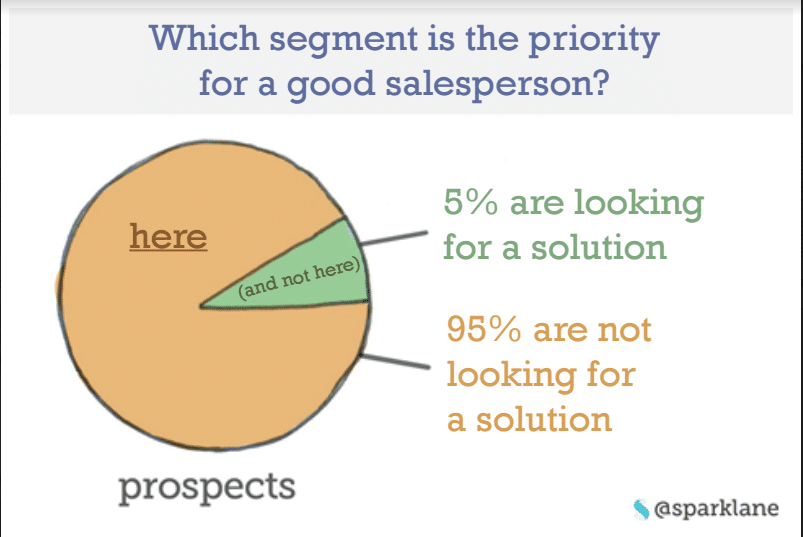 Figure 2 Heiman and Bosworth are in agreement: a company’s largest competitor is lack of action by a prospect

This is why it’s a mistake to assume that the competition is limited merely to other competitor companies. The work a company undertakes to fight off competition, along with the sacrifices it makes (lowering prices, reducing supply, etc.), may be too great to enable it to turn in a profit. Meticulous prospecting work and a consumer needs analysis informed by Sales Intelligence are certain to deliver stunning victories without the need to spill even a “drop of blood”.

Last phase of Strategic Selling: establish the plan of attack

Sun Tzu said: “Do not keep using the same winning tactics, but adapt your plans to suit each particular set of circumstances. “

Now that we’ve seen the theoretical principles of Strategic Selling, it’s time to draw up a plan of attack. A salesperson is constantly fighting multiple fronts simultaneously, and is constantly required to manage multiple situations which involve a variety of contexts and levels of urgency. This makes it important to produce a list of tasks to be carried out for each area. There are 4 stages to creating such a list:

Note: it’s possible for a single person to fit into several categories simultaneously.
Suggestion: show the degree of influence held by that contact in a note in brackets (e.g. (H) for “high”, (L) for “low”)

3. Ensure the decision makers win: the basic aim of a sale (especially a complex sale) is to provide a benefit to all participants; not just to obtain an advantage from the sale, but also to lay the foundations of a long-term relationship. If you carefully identify the respective priority of each decision maker, you’ll be able to tailor your sales pitch, and even your solution, to deliver a benefit for them. Here are a few sample goals for each type of decision maker:

– Provide a strong ROI
– Stay within budget
– Minimise operating/maintenance costs
– Show he is the ultimate decision maker
The User Buyer:

– Acknowledgement
– High profile and responsibility
– Be seen as a problem-solver

4. Type and level of competition: As we’ve already seen, competition is not limited merely to competing companies. Instead of asking, “What should I do to avoid being beaten by a competitor? “, think positively and ask yourself instead, “How can I add value for the customer? “. And the best advice I can give you in that respect is to read our article on Value Added Selling.

So you’ve now had a brief glimpse of Strategic selling from first observation of the terrain through to the plan of action. As in a war, some battles will be decisive (a meeting with a highly influential future user of your solution), while others will require a strategic retreat so you can marshal a counter-attack (an insistent technician won’t let you off the phone, but you don’t have all the information for the solution at your fingertips). In any case, I recommend you read the book all the way through for yourself: it’ll refine your strategy and make you a real Genghis Khan of the sales world.

Sales
By Yann Gourvennec16 May 2020Sales