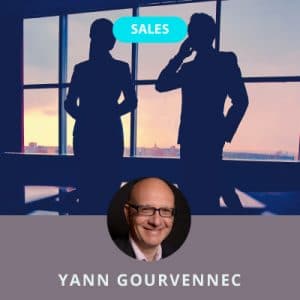 Combining the real and digital worlds to achieve success

What are my suggestions for improved sales productivity? Last month’s article featured a compendium of advice taken from sales methods we’d previously examined. Although it’s critically important to take these points on board, the actual methods aren’t the answer in themselves; each has its limits, and is no substitute for the age-old skills of the sales representative. First among these skills is listening, but – as we’ll see – words can sometimes be overly simplistic. So here are my seven tips, drawn from my experience on the ground.

It’s one of the big clichés of sales training, but when you’re a young sales rep, it’s almost impossible to appreciate what it actually means. And when I talk to the not-so-young, I realise age has nothing to do with it. Initially, the word “listen” has a paralysing effect, and there’s a strong temptation to switch from a “torrential flow” of product catalogue recitals to complete silence (“I’m supposed to listen, so I’ll say nothing at all”). Like so many before me, I’ve also been guilty of believing that to hear, you simply have to listen.

Instead, sales listening is about a subtle mix of patience and stimuli. Yes, you do need to be able to listen, but actively. That’s why the “solution selling” method was a complete revelation to me. Its primary goal is to sound out customers’ latent desires by helping them to birth their “pains”. But once this phase is over, the effective salesperson will be able to bounce back and act. Better still, they will understand the customer’s pain points intuitively, being able to identify them precisely and reveal the hidden need.

We’re not talking about just any sort of respect here. The customer may well be king, but the salesperson is his prince. Selling is a tricky art which goes far beyond the mere event that is the sale itself. I started my career in IT by developing my own system of calculating margins using price and cost databases. Obviously, such a system facilitated basic internal discussions. But also – and more importantly – it enabled me to negotiate with the customer, allowing us to treat each other as equals. The goal is to satisfy the customer, naturally, but also to educate him. Below a certain price, what you’re making isn’t a sale, but a loss.

And that’s what you need to avoid at all costs. And that’s another lesson learned from hard experience: the only customers who respected me were the ones whose respect I won in advance. This mutual respect must be created without anyone losing face. Selling is such a rich, psychological discipline, it’s surprising to see so many business students overlooking it. The school of selling is the school of life, because we spend our whole lives negotiating.

This is what salespeople call closing: it’s an essential part of the process, and that’s why I have a particular fondness for the Selling Fox. Never pushy, but always on the ball, the Selling Fox lets nothing slip by him, knowing that a polite, friendly phone call can hardly be classed as stalking. In fact, good customers are always grateful to good sales reps who keep tabs on their business. To do this, the Selling Fox keeps a cool head; he doesn’t get carried away or over-excited, but neither does he let go of the prize.

Closing is the sales rep’s very raison d’être; it’s the rush of adrenaline; the end of a long and difficult process. It’s a victory over yourself, achieved alongside your customer, never against them.

Never lose your head or start counting your chickens, don’t get big-headed, and beware the adrenaline rushes that are so common in this business. I have a technique to help me with this, and it’s detachment: never be satisfied with a pre-sale, grit your teeth, stay calm, and above all learn to develop a very thick skin, because to win you also have to learn to lose and make it look like losing doesn’t matter to you. And I don’t just mean in front of others, but in front of yourself too. Negative thoughts are contagious, so push them out of your head.

After all, a good salesperson is primarily a social animal. In complex sales, he seeks to build a series of weak ties. I often hear people criticise sales reps who spend their time on LinkedIn. They may have a point if those reps spend all their time chasing “targets” in hard-sell “show me the money” mode. Don’t laugh, I’ve seen it happen. It’s all too common to see sales reps, led on by fashionable trends, confusing “social selling” with “aggressive hard selling”.

Online social media may make it easy to forge relationships, but that doesn’t mean it’s just a sales channel like any other. Especially in B2B, where customers “don’t like to be sold, but they love to buy”, the immortal words of Gitomer, whose Little Red book we studied earlier in this series. And yet Gitomer has nothing to say about social media, despite using it himself (especially YouTube). That’s because networking is the method, and LinkedIn is no more than a tool. Not the other way around. Despite what our amphetamine-fuelled hard sellers would like us to believe.

6. Point six: give before expecting to receive

This is a piece of advice I save for complex B2B sales, even though it can easily be adapted to other areas (once again, B2B is ahead in many respects and, despite what you might think, customer maturity is greater). We’re here to solve our customers’ pain points and, sometimes, even help them to become aware of them. In complex sales, there’s no such thing as a need (although the meaning of this word has been debated since the days of Socrates and his famous Glaucon dialogue on that subject, which I heartily recommend you read Plato’s Republic, 372d). After all, it’s very hard to develop solutions which, most of the time, address a problem which didn’t previously exist. Indeed, that’s the very essence of sales in the innovation and high-tech sectors, but also in industry and B2B in general.

And that’s where evangelism comes in. At AOL, I met the evangelist David Shing, who has even become something of a prophet: see my video interview with this phenomenon. But evangelism isn’t about trotting out an insipid, monotonous spiel filled with banalities and generalities to an audience of haggard customers who are supposed to swallow your words without flinching.

The white paper – which would really benefit from a different name that doesn’t suggest “blank paper” – should inspire and offer added value. Forward-thinking sellers involved in complex sales will be able to use this evangelism content to support their pitches and convince their customers, instead of seeing the content as nothing more than marketing which has no impact on sales. This approach is difficult for some to understand – and yet I believe it’s absolutely fundamental.

7. What about hi-tech, and the role played in it by sales intelligence?

My seventh tip is that all tools are ultimately just tools; it’s only when we understand them properly and control them fully that we can strike the right balance between the method and the tool which supports it. That’s when we stop seeing artificial intelligence as a substitute for real intelligence, and take it for what it really is: a powerful tool which can support the sales process and sales reps. And the same is true of Sales Intelligence, a tool which (when we understand how it works and how to use it) lets us go further and deeper in prospecting and selling, achieving incredible performance gains, just so long as we don’t forget the basics of selling.

In conclusion, let’s not compare apples and oranges: tools are just tools. Methods remain useful, and enhance the tools. Better still, the switched-on sales reps who can master these methods will be the ones who are able to get the most out of sales intelligence and other tools designed to assist the sales representative. Sales reps who have been able to distil them to their very essence, and will unquestionably reap the benefits for having done so. And so will their bosses.