Is a complex sales method still useful? The question may seem surprising, even absurd. However, various anecdotes heard here and there would suggest that sales, and its methods, are just an additional activity. Apparently, you just need to click on LinkedIn and raise your SSI (Social Selling Index). And hey presto, clients will come running. It will no longer be the case that because you’re selling, your index rises, but instead that because your index is rising that your sales are increasing.

It’s not the SSI that sells

Without minimising the impact of Social Selling and inbound marketing, rather than seeking to prove that a tool sells, which would be like asking if buying Bocuse’s stove turned you into a 3* chef, I wondered whether sales methods (I counted a dozen or so of them), which are often old, were compatible with the digital era.

With the first article of this series, let’s take a look at the method called SPIN Selling from Neil Rackham, a renowned British consultant, now based in the USA.

The least that we can say is that Neil Rackham did not create SPIN Selling based purely on his intuition. To the contrary, his book is the culmination of a significant sales study (the largest study ever made at the time) that Rackham undertook with Huthwaite, the sales consultancy firm he created in 1974 and the support of several multinationals like IBM and Xerox. Over ten years, this study involved a team of 30 people, who dissected and analysed no fewer than 35,000 sales calls, from 27 countries. The study cost an estimated $30 million at current rates.

Sales people’s interest in this project was also very strong: 150,000 of them bought the book based on Rackham’s study, simply called SPIN Selling. It has to be said that the study’s conclusions are markedly different from established conventions, and that it widely criticises and challenges traditional sales methods. This was not the aim of Rackham, who initially claimed to be undertaking this study so as to “validate the effectiveness of the traditional methods.” However, the number of sales directors (including those from large companies like IBM and Xerox) filing into his office to ask him to audit their sales processes foreshadowed radical change.
In fact, the majority of large companies were conscious of the ineffectiveness of their sales people as soon as the sale became complex, namely when the investment required a relationship more elaborate than a simple and single phone call to the client. The situation was even more frustrating for these companies as the investment made in training their sales people was already substantial. 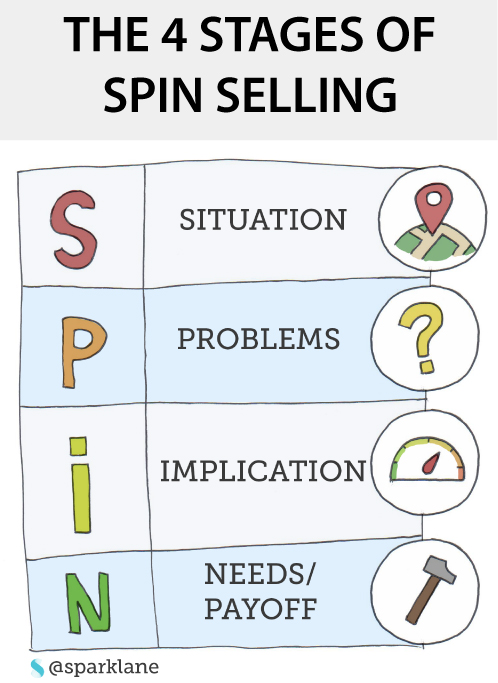 Traditional sales methods are not new; according to Neil Rackham, most of them were created in the 1920s. However, they have not fallen out of fashion: they still work and, unlike the clichés heard here and there, will still work in the future (in any case, this was Rackham’s opinion in 1984). Yet they were created for simple and rapid sales, where the client makes a decision at the end of a phone call. The best sales people in this kind of sales run into a series of failures when the sales become complex, quite simply because simple sales and complex sales are two different universes. Here are some of the main differences:

These differences reflect the need for a different approach. The seller must establish a connection with the buyer, create an interaction, which implies the necessity of asking questions. In fact, during the development of this study, Huthwaite’s researchers rapidly reached this surprising conclusion: the sale has more chances of completion when the buyer (and not the seller) conducts the conversation. This could seem counterintuitive to some people, but it is not enough to present your product to the client for them to want to buy it: it is by taking an interest in them and listening to them that we establish a connection with the lead. And it is this connection that will win their trust and then make them want to buy. In other words, it is not up to the client to ask the seller questions but, to the contrary, it is up to the seller to ask the client questions.

SPIN: guiding the sale with 4 types of questions

The SPIN method is based on four types of questions:

An appropriate method for the Digital Age

If we chose to address the subject of SPIN Selling, it is because, nearly thirty years on, this solution is more relevant than ever. The ZMOT (Zero Moment Of Truth) is the moment at which the client researches a product before the purchasing act. Google estimates that 89% of B2B buyers prepare to buy in this way. Suffice it to say that the great majority of them are already advised about the product they’re planning to buy, and now know more about the seller than the seller knows about them.

When we read the SPIN method carefully, it becomes quite clear that digital is the perfect ally of the sales person; it enables them to shift the balance of power created by the ZMOT, which is not in their favour:

The business signals that we can detect via sales intelligence indicate to the sales person the companies that may need the solution they are selling. The precise information on the company and its context will enable them to alleviate the “S” part (Situation questions), and show the client that they are interested in their situation. This relevant and immediately available information prevents the sales person from spending too much time on monitoring upstream.

In the same way, predictive lead scoring will accelerate and automate the sales person’s work by determining if the prospect effectively corresponds to the solution, or if they are outside the target.

In the “N” part, artificial intelligence can help the sales person find the most appropriate solution: in very large companies, there are sometimes several hundred solutions, and sales people don’t know them all or are used to proposing solutions in a restricted range, which they know better and with which they are more at ease. A cognitive service (for example, IBM’s Watson), using criteria provided by the sales person, will seek out appropriate solutions which the sales person would not perhaps have thought of.
Moreover, these points are addressed in detail in a Sparklane white paper on sales intelligence entitled: “How sales intelligence is transforming B2B sales.”

So, digital integrates perfectly into this method by providing the sales person with relevant tools in the different stages of questioning. This offloads the research and preparation work from them, and lets them focus on an aspect that a machine cannot (yet?) achieve: building a relationship of trust with the prospect. Because at the end of the day, the sales person, armed with this information provided by sales intelligence, should always go to visit their clients. Because tools help, but they do not replace selling.