Skip to content
AI and automation will be a staple of the B2B sales processs according to Forrester. Sales Enablement is booming in the US, and Europe will inevitably follow suit. This is perfect timing for the launch of a series of posts on this subject throughout the year, covering all aspects of the evolution of the sales profession under this technological push. The fast-paced transformation we are witnessing today due to this crisis will have a lasting impact on the sales landscape. To kick off this series, I’d like to take a closer look at the numbers Forrester disclosed in a recent B2B sales report to try and better understand this phenomenon. 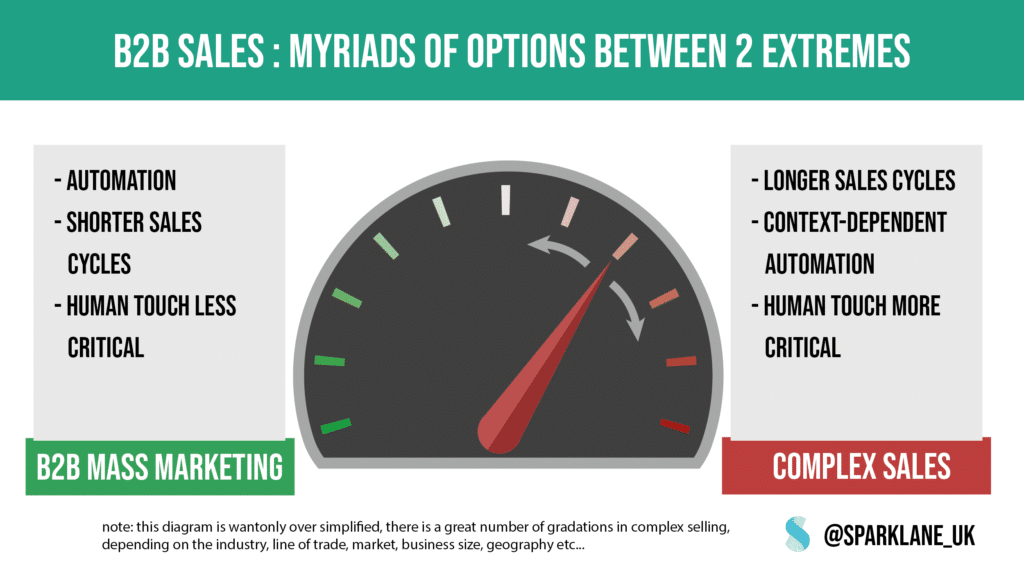 Forrester is a specialised Tech analysts group whom I particularly like because of their independence and the manner in which they operate. Their vision of the future of B2B sales for 2021 is extremely interesting. It describes, among other things, the prominent place of AI and automation in sales (or should we say “Smarketing” rather, as these two spheres are in constant and growing interaction), to the point of forming the basis of what Gerretsen described as “The augmented salesperson.” Let’s put aside the fanciful visions of robotic salespersons let alone sales reps replaced with machines and instead talk about a more human and realistic future, where machines and algorithms will be readily available to support us in our tasks.

The prediction about the growing significance of these two interrelated elements in the sphere of what is now called “Sales enablement” makes me think that we need to take a bit of hindsight and reconsider this terminology and its underlying meaning. It’s worthy of note that the semantic shift we have witnessed in recent years is of paramount importance. As a matter of fact, when I started my work in sales tech, the marketing side of sales support used to be called  “sales admin.” And it’s still called that way by some HR buffs and I wonder why since nobody uses that term anymore as most admin tasks have already been automated, unless you live in Jurassic Park.

Going back to these early days of Sales Admin, although we used to be reporting to the marketing Director, our job description (I was the creator and coordinator of a pricing, margins and configuration system and a Salesforce Automation tool in the mid-90s), showed how most people were feeling about what we were doing, however good we were at it. Since the mid-2000s, the term Sales Enablement — which arrived more recently in continental Europe — is the sign of a much bigger evolution, beyond a mere change of vocabulary. “Enablement” may well be an invented word, yet it conveys a far more positive image of our line of trade and its tools, and is more in synch with reality. The rise of AI and automation only reinforces this evolution, which is not just a matter of change in terminology.

What is Sales Enablement?

First, let’s go back to the definition of this term of Sales enablement:

At its core, the concept is simple: Sales Enablement is about equipping your sales team, with the strategic resources they need to excel, from tools to technology to content and beyond Mike Weir – What is “Sales Enablement”

The question of the definition of the term “enablement” is not trivial. It may well be an invented word as we’ve already pointed out. H owever, it is perfectly understandable and that is probably why the concept is gaining momentum. In Weir’s explanatory text, it’s all about tools and technology on the one hand (here, technology is to be taken in the sense of the underlying infrastructure), but the most important part of that quote is “and beyond”, as well as the prominence of content. It’s content which makes it possible to answer and document your existing and prospective customers’ most significant questions; that’s a fundamental aspect in the work of an “Augmented Salesperson.” The importance of these two elements — AI and automation — in the world of sales enablement is not news to me. Looking at my past musings on AI on this blog (here for instance) will show you that the change has been in the making for quite a while. What the Forrester report reveals is that t his shift is now overwhelming.

We are witnessing a change of scale, but not of nature.

However, it seems to me that we can delve a lot deeper into this 60% forecast to provide a more precise reading of the deep transformation of Salespersons’ jobs per se.

Everyday, I hear “business to business” mentioned and we are all taking it for granted that it means the same thing to all even though it’s far from being the case. One could therefore imagine that sales be divided into two equal parts. FMCG consumer sales at one end, and at its very opposite end, business to business sales, regardless of the product, service or industry. Unfortunately, appearances can sometimes be very deceptive. B2B is a field that covers very different situations. We can try and picture them with a dial and a pointer which moves to one side or the other depending on the context. A little to the left, and you are closer to mass marketing (still B2B marketing, of course, but very similar to B2C), a little to the right and you are moving closer to the most sophisticated complex sales. 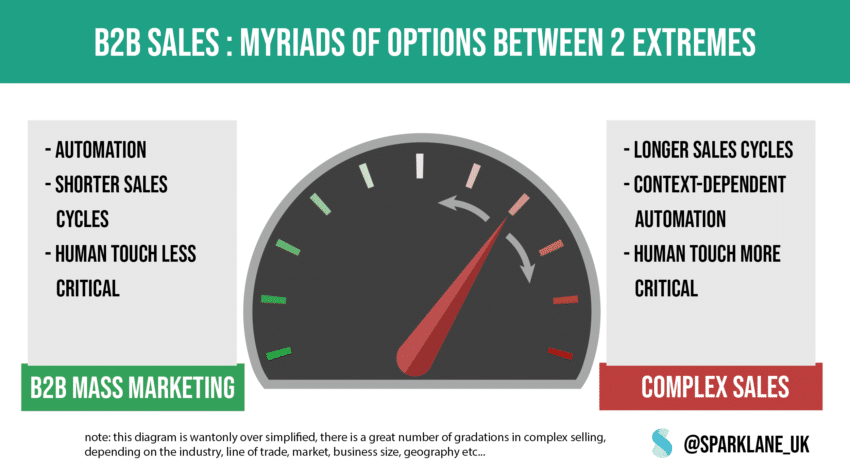 Let’s take an example. Should you sell mobiles to professionals in what is called the “lower end of the market” — nothing derogatory here, it simply means that you are marketing to small and very small businesses — you would be performing B2B mass marketing by definition, because of the large number of customers involved (millions of them for a country like the UK). This explains why all telcos are always in a bit of a jam when it comes to putting the right organisation in front of these segments. A B2B mass marketing example The sale of cell phones to small and medium-sized businesses is therefore often moving backwards and forwards between the consumer arms of telcos and their B2B departments (where key accounts management is to be found). Quite often as it were, it ends up as a separate department within the consumer arm of the telco. Such departments master mass marketing tools and deployments. The label on the product or service will often relate to the B2B brand (Verizon Business vs Verizon, Orange Business Services vs Orange etc.) At the very end of the B2B sales spectrum, far away from mass marketing, one finds complex sales aiming at C-suite decision makers. If you’re selling nuclear power plants, for example – this instance is a tad extreme I admit – your sales model will have nothing to do with the other example we have mentioned above. Neither the model, nor the level of complexity nor the decision-making process, not to mention the politics involved in such deals will ever be the same. Somewhere in the middle, you will find a whole bunch of different sales models that are more or less complex, sophisticated and personalised. That’s the reality, and the diversity of B2B sales. Models that range from dire mass marketing to highly sophisticated and personalised approaches. Each of those do use automation and AI in their own right, at some point of the sales cycle.

2. Zooming in on the B2B sales cycle

Let’s take this opportunity to zoom in on the B2B sales cycle (or cycles rather). 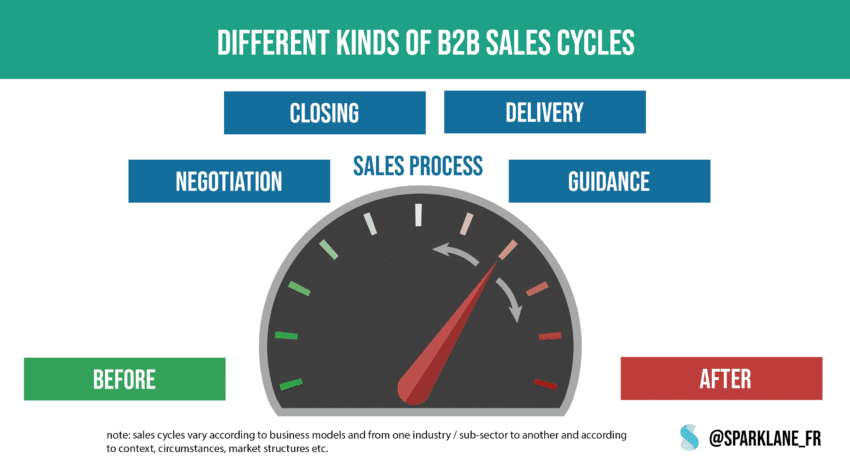 Similarly, we could represent the various B2B sales cycles on a different dial with a similar pointer. On that dial, one would depict the different stages of the B2B sales cycle. In that context, AI and automation wouldn’t have the same meaning depending on where on the scale the cursor is located. A little to the left and you will be in the discovery and analysis phase, before the deal is made. Move a little to the right and you will project yourself into the post-sales and support phase. In the middle, a myriad options exist with regard to what automation and AI can bring to B2B sales. Imagination is the limit.

The devil is in the details

To conlude, I’d like to get back to this number quoted by Forrester. To put it in the words of my old maths teacher, one shouldn’t mistake precision for accuracy. Thus, the impact of AI and automation on the sales force is unlikely to be, and it cannot mathematically be, similar at all times in the sales cycle. Let alone across all forms of business-to-business as expressed above. Note: to better understand Forrester’s prediction, see the box below It is clear that, while agreeing with Forrester’s prediction on the equipment of the sales person of the future (and even of today for the most advanced of salespersons and organisations), the implementation of new productivity tools will never be one-size-fits-all. It means – to put it in a nutshell – that smaller and more agile businesses will resort to industrialisation and online sales, whereas more sizeable ones, will need personalised support and guidance. AI tools for salespeople are therefore available at all levels of the sales cycle and for all types of B2B businesses and their impact, as well as their usage, will vary from one business to another.

Some of the topics we plan to cover this year

Get ready for a lot of updates on this blog, with new topics and new subjects, among which you will find the Augmented Salesperson (which we will try to define more precisely), the different types of leads and their analysis, the reinvention of sales after COVID-19 (if it ever ends) and the “selling through your screen” concept, and finally, many comparisons and practical advice on tools and technologies, which will allow our readers too to become augmented salespersons.

About the Forrester report

Forrester’s Future of B2B Sales 2021 report is available online for subscribers. We’ll come back to this report in more detail later as it holds some particularly interesting insights. We were able to put our questions to Forrester, and Jay McBain and Mary Shea answered them although unfortunately I couldn’t get more detail on what was behind this 60% number.  Nevertheless, here are a few methodological details on this study of B2B sales by 2021. The analysts’ answers have been added to this summary. “Exact sample sizes are provided in this report on a question-by-question basis. There is no guarantee that the panels are representative of the population.”
By Yann Gourvennec24 March 2021Non classé